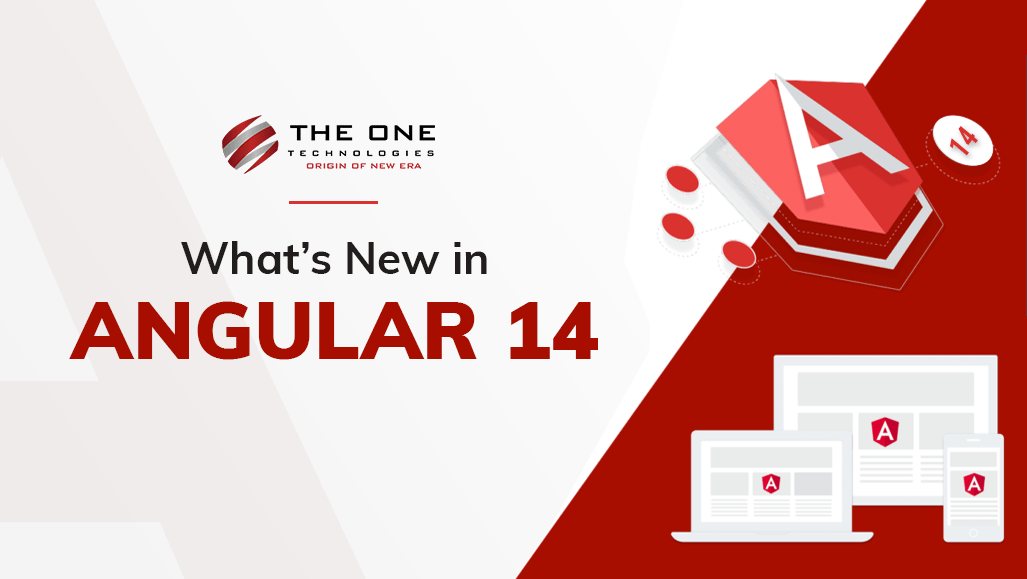 New features such as typed forms, better template diagnosis, and independent components are introduced with Angular 14.

By eliminating the need for Angular modules, Angular 14 aims to simplify and speed up Angular app development. Stay with us as we review the latest features of Angular 14.

Angular 14 is the latest version of Angular, a widely used framework for developing mobile and web applications with TypeScript. In addition to its improvements in efficiency, Angular includes new and robust CLI features, streamlined page content accessibility, and strictly typed forms.

In addition to the new features and bug fixes, this release also features many enhancements and bug fixes contributed specifically by members of the user group. We'll take a look at Angular 14's key highlights and major updates.

Angular is primarily composed of components. An Angular 14 application is essentially a collection of components with a single component at the core (known as AppComponent).

Note: What is a component?

A component consists of a TypeScript class with an HTML template and optional CSS stylesheets.

As a group of commands, Angular components are always tied to a template. A template can only create one component per item, which is different from other directives.

It’s possible to use the same component throughout an application and even in other applications. Repeatable components are used whenever we need to perform common or repeatable tasks. This simplifies code reuse.

According to GitHub, strictly typed forms are the most requested Angular component. By using these forms, the framework enhances its model-driven method of handling forms.

Typed forms ensure type safety across all API layers for the values stored within form controls, classes, and arrays. Forms are more secure this way, especially when they are multilayered and complex.

It is now possible to use Angular modules. It is the first time you can also use standalone components.

The standalone components of v14 are currently in developer preview. These APIs are ready for use in your applications for testing and coding, but they are not fixed APIs and may undergo changes outside of standard backward compatibility guidelines.

Angular released an RFC (Request for Comments) on standalone components with the goal of making NgModules optional. Because of this, modules will not be replaced completely to maintain compatibility with today's Angular ecosystem. The developers will add alternative modules instead.

With V14, embedding a view now has the possibility of passing in an injector. It is possible to customize the component injection behavior inside a particular template using the injector.

There are no warnings issued by the compiler in previous versions of Angular, including Angular 13 and earlier. Builds function accurately unless there's a problem. An incorrect two-way binding syntax, for instance, can easily lead to an error.

The compiler matches typescript codes to prevent developers from making common errors with Angular 14. By using extended diagnostics, you can gain a deeper understanding of your templates and how you might optimize them.

As of now, the framework has two updated warnings, one for the reverse banana in a box ([]) syntax (intentionally or unintentionally) and an extra nullish coalescing (??) if the input cannot be nullified.

Banana in A Box

If you hire angularjs developers, be sure that he worked on the latest version of CLI - Auto-Completion. Moreover, it makes you more productive by enabling you to build objects such as components, modules, and directives.

In most cases, you will have to look through the relevant document to see the commands and corresponding options. The good news is that Angular 14 no longer requires this option.

The autocomplete feature in Angular 14 is truly fantastic!

By standardizing the CLI argument structure, you can ensure a uniform encoding across the entire Angular CLI.

As a result of careful preparation, Angular has minimized the volume of boilerplate code needed to launch the application. In Angular 14, commands like Angular JS serve can be automatically completed in an instant.

There is always a typo at the root of (almost) every command line error you encounter. However, Angular 14 has introduced a type-ahead suggestion and an improved NG autocomplete to fix this issue!

In version 14, the CLI will ask you to switch to autocomplete during your first command run. This way, every user knows about the latest changes to Angular. Alternatively, you may run NG completion yourself, and the CLI will handle the procedure on your behalf.

In Angular 14, the CDK Menu and Dialog have been bumped up to a final version! In addition to CDK menu elements and CLI auto-completion, tooling upgrades provide the building blocks for a more robust development experience.

You should always ensure that your app's page titles clearly indicate each page's content. It’s important to remember that the title of your page will render your content differently when you are creating and programming an application.

An extensive scheduled revision by Angular, Angular 14 promises to be the most comprehensive upgrade yet. Several enhancements have been made to Angular in its 14th version, namely CLI completion, stand-alone components, optional injectors in embedded views, and typed forms.

The Angular developers at our company are dedicated to providing web developers with the most up-to-date version of the TSL framework while still keeping them on top of other web technologies.

We recommend that you move to Angular14 and hire AngularJS developers to develop safe, high-performance, and stable apps. Let our AngularJS development services assist you in building a comprehensive project based on your specific needs.