Django Vs Flask - Which One is The Best Python Web Framework? 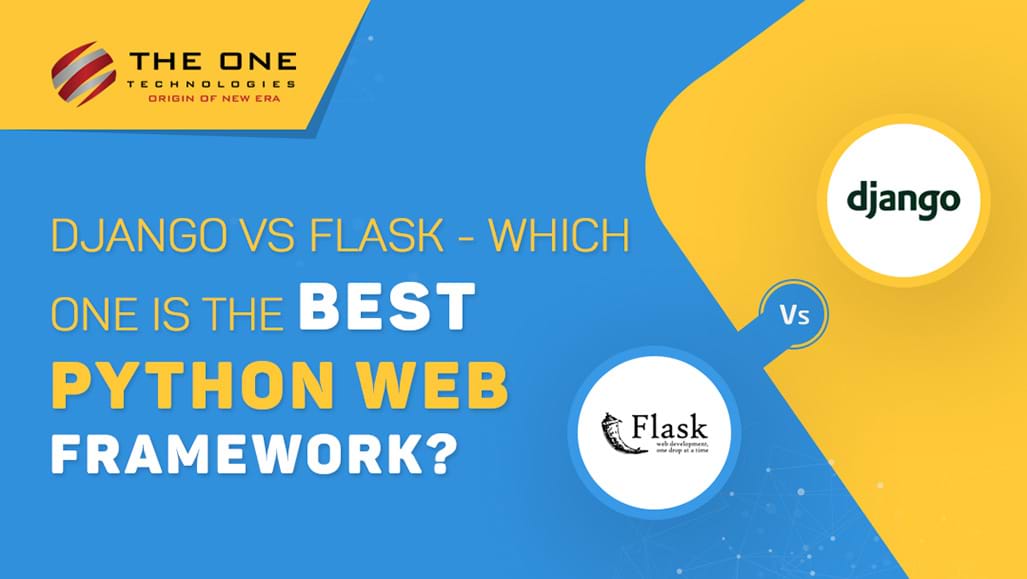 Python is one of the most popular and demanding technologies for web development. It has a rich ecosystem like tools, libraries, and frameworks. If you are already using Python for your web development, then Python and its framework are already making the life of web developers easier by enabling them to build all types of web applications - small, large, complex and lightweight quickly.

If you are familiar with Python and into the Python web framework, then I guess you must be knowing that Django and Flask frameworks are clear leaders and the most popular frameworks among developers.

Django is a full-stack web framework for Python language, whereas Flask is a lightweight and extensible Python web framework. Based on the batteries-included approach, Django is developed. It helps developers to perform their web development tasks without using third-party tools and libraries.

This is just a glimpse of what we are going to explain in this article. And if you are still confused and not aware of which one to choose for your web development project, then your doubt will surely end after reading this blog on Django Vs Flask. Being a top Python development company, our Python Django developers will help you make the best technology choice for your project.

Django is an open-source, high-level web application framework written in Python. Django offers a set of components that increase the speed of development and make the entire process easier for developers.

There are many popular web apps and sites such as PBS, Mozilla, Nextdoor, Disqus, Instagram, The Washington Post, and many others use the Django framework.

Flask is a micro web framework written in Python that doesn’t require the use of particular libraries or tools. Flask doesn’t allow developers to integrate with third-party libraries. It supports extensions that can include features easily. Some of such extensions consist of authentication, form validation, and uphold handling functions.

Netflix, Reddit, Zillow, LinkedIn, and MailGun have been using the Flask framework with great success.

Comparison of Features: Django Vs Flask

So, now you have come to know the basic difference between Django and Flask. It’s time to take a closer look at their features and their comparison to clear your doubts.
Here’s a comparison of features - Django Vs Flask.

If your database is used by your application, then you are in need of ORM. It helps in the process of mapping your models to a database schema.

The Django framework has an ORM in with it which is suitable for most use cases. There are some advanced queries performed by exception.

However, in this case, you can write a raw SQL query or use SQLAlchemy with Django-sabridge. Django also allows you to do model migration.

When it comes to Flask, it doesn’t come with ORM. If you want to use ORM, then you can choose from SQLAlchemy or PonyORM. However, you may be required to have additional tools for handling migrations.

Templates of Flask Vs Django

A template is one type of tool that helps in creating HTML documents dynamically.

Django comes with Django Template Engine. With the help of other template languages like Jinja2, Django allows developers to use this template. You can use one or multiple languages in a single project.

Whereas inspired by Django Template Engine, Flask comes with Jinja2. It has great features that can be used by a Python developer in the project.

Forms are used to collect the data provided by users. During registration or logging, forms can collect these data.

Django has a complex tool for working with forms. It supports creation forms, data validation, and CSRF Token validation.

Flask doesn’t offer any tools for handling forms. If you wish to use forms, you are required to use an external library like Flask WTF.

Admin Panel of Django Vs Flask

If you want your application to be managed by a non-technical person, then an administrative panel is used to handle and manage your database content.

Flask doesn’t have an administrative panel. If a developer wants to use an admin panel, then they will have to use it with the help of external libraries like Flask-Admin or create it on their own.

Authentication system can be used when your application includes granting permissions to resources, creating accounts, or other actions where the user has to be identified.

Django comes with an authentication system with permission levels and groups which are ready to use. You can easily customize it.

Whereas in Flask, your Python developers will have to implement that system on their or with the help of some external libraries.

Security of Flask Vs Django

If you are developing a product that consists of sensitive data, security plays one of the essential and important elements of the web application.

On the other hand, Flask supports protection against XSS in Jinja2. But you have to keep in mind about protecting against other attacks when choosing additional tools.

When we talk about performance, Flask is considered to be faster. Since it’s smaller and fewer layers, it works faster. But in reality, the actual performance difference is not that significant. And it doesn’t matter that much in the production environment.

Since Django follows the “included batteries” approach, it helps to deliver the final products very quickly. Any developer or the person with no deep knowledge can create a useful application with it.

Django processes may be considered magical by beginner programmers. Flask has less “magic” and is easier to understand. It’s a suitable option to create a minimalistic application quickly.

Conclusion for Django Vs Flask

So, which framework to choose for your upcoming project? Django or Flask? Both are different when it comes to offering features and on what you are aiming for in your project.

Django has many tools to offer. That minimizes the number of external dependencies and boosts the process of creating apps, and is just convenient. On the other hand, Flask is more flexible, minimalistic, and allows you to choose any tools that you like. But that freedom comes at a cost; the time spent on implementing things you get in Django for free.

Django has great community support which helps developers in solving their queries and problems. As compared to Flask, Django has a rigid application structure that can play a key role in your project.

Flask can be used in an application that has a narrow scope of functionalities. If you are working to develop a complex application and the freedom of choosing tools is not important to you, then Django is the better option for you.

So, if you are still confused and not clear which framework to choose, then You can also leverage our Hire Django developer services.