Is Flutter A Right Choice for iOS App Development? 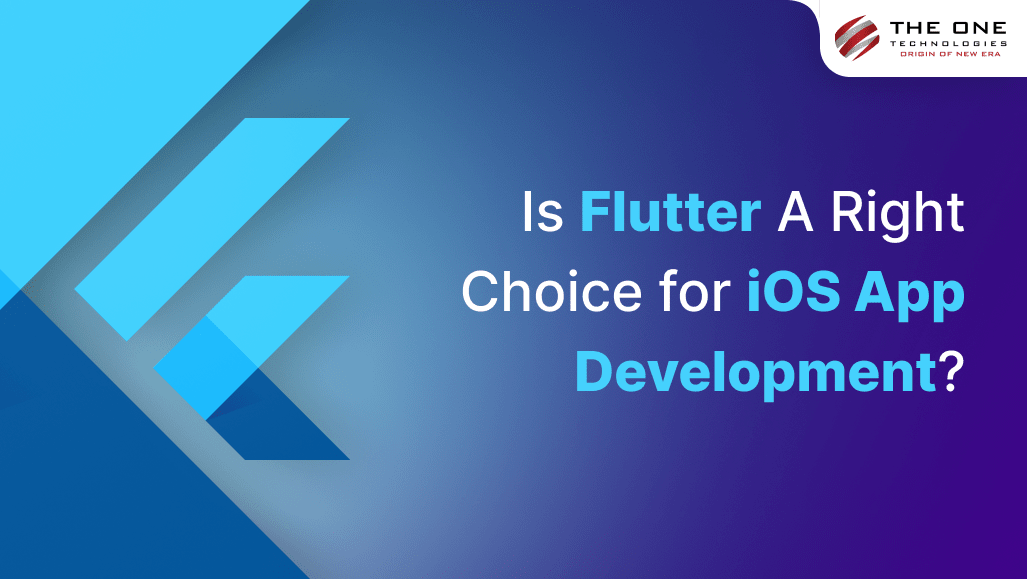 Mobile app developers are adamant about finding more efficient and affordable ways to deliver their software to users. Finding and employing the appropriate development tools play a crucial role during and after the development process.

It is a fundamental reason developers opt for Flutter for iOS app development, which makes sense as the most logical explanation for the latest announcement of Flutter's management team.

They reported an increase of more than two million developers employing the framework in the year following its release. New evidence also suggests that this tool is enjoying an upward trend in consumer and enterprise app development. But what is actually behind this success?

This article examines Flutter's most noteworthy features that have made this toolkit stand out. We'll also discuss its advantages for iOS developers.

Flutter is a software toolkit that enables the streamlined and fast development of mobile applications across multiple platforms. With Flutter, you can swiftly create professional Android and iOS applications that are natively written.

Rather than writing code for two separate apps, you should simply find one codebase that works on both operating systems.

Therefore, developers must use two languages and frameworks to construct applications for both platform types. It is why a platform-independent tool such as Flutter provides the solution many developers have been waiting for.

It also helps them save valuable time, resources, and effort.

Previously, Flutter was considered only compatible with Google services, like Chrome. But Flutter's introduction as the cross-platform framework revolutionized everything. In addition to its famously native performance, it also offers:

And other unique attributes are well known these days.

Flutter developments entail a series of modern tools that are different from those found in original iOS apps. Let's break down the toolkit and figure out why Flutter is such a successful player.

User Interface (UI) development is a very complex process, and evaluating alternative approaches is tedious in app development. However, Flutter app development for iOS is an excellent resource because it equips programmers with the visual capabilities of the Material Components Library.

This is an adaptable solution for Android and iOS app implementations. Using Flutter enables them to apply smart widgets (i.e., critical components for building UI) quickly and efficiently.

It is significantly easier to develop apps with Flutter's hot reload feature. Using this open-source tool, you don't need to repeatedly reload the app to see every change after you modify your code.

The kit enables you to make live changes to your app and enjoy a greater level of freedom and versatility to tinker with the code and resolve issues immediately.

Your application's deployment can be facilitated and automated with continuous integration (CI) and continuous delivery (CD). Follow CD guidelines with Flutter to ensure your application is made available to your testing team and frequently validated without switching to manual processes.

People use various mobile and computer devices running different operating systems such as Windows, macOS, Android, and iOS. As a result, organizations must cater to these preferences to achieve unity and a smooth user experience.

Flutter helps them accomplish that better.

Now that we reviewed the fundamentals of Flutter, let's look at the practical aspects that have made this application framework so unrivaled.

Flutter provides many sophisticated capabilities, such as pre-installed add-ons and GPS location tracking. It also facilitates app developments that rely on operating system-dependent characteristics. It means that businesses can create and use Flutter apps without any inconvenience.

People who already have apps built and installed somewhere might be reluctant to migrate to Flutter. This hesitation is primarily because developing apps with a new platform may present unexpected challenges that are sometimes quite expensive.

Flutter prevents this from happening as it supports embedding features into the source code of original applications. As a result, you can quickly switch to Flutter.

The scalability of Flutter-based applications is the same as that of their native counterparts. With Flutter, you can design flexible applications that run smoothly on smartphones and tablets. The Flutter framework lets you develop apps that run on multiple platforms at high speed.

Its multi-layer structure supports full scalability, lightning-fast rendering, and customizable layouts. It provides users with a seamless and convenient method of interaction. So Flutter is a perfect tool for creating a good product with a good user interface.

Companies must deliver enhancements and modifications to their applications as quickly as possible. Using Flutter, developers can use standard code bases to support the following functions.

Your Next Step for Flutter App Development

Flutter is perhaps the best thing that has ever happened to the mobile development world in a long time. If you haven't tried it yet, we highly recommend you do so. It has a fantastic framework that pushes both existing cross-platform frameworks and native platforms forward.

Flutter has numerous features, including enhanced app development and parallel app enhancements on iOS and Android. Although Flutter is still relatively young, there have been multiple updates to Flutter since its initial release.

When designing a successful application, you have to consider your objectives and your project's business plan. Flutter is a good framework in many regards, but like any other cross-platform tool and framework, it also has some limitations.