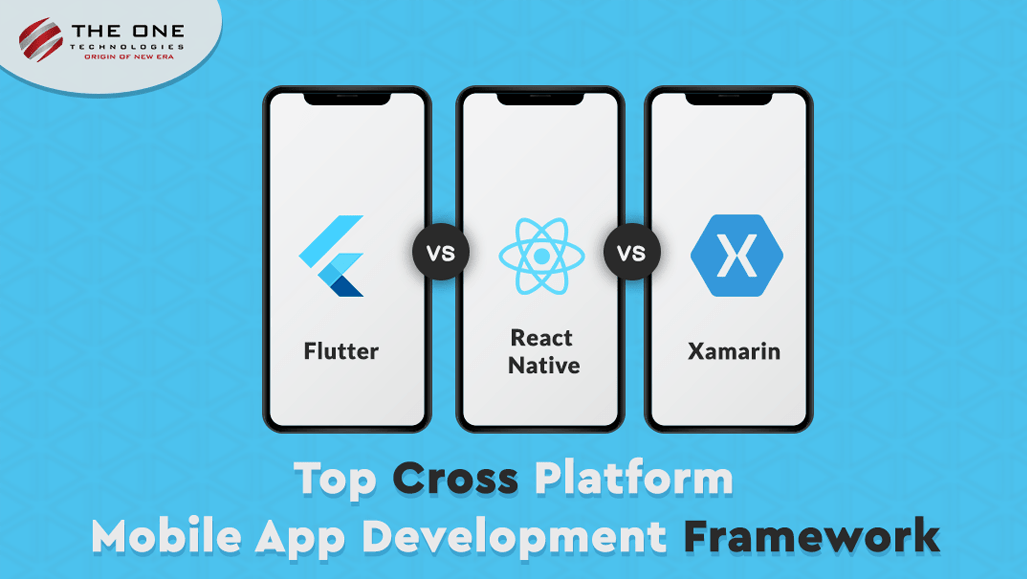 In the last five years, the mobile industry has seen immense growth and change in the arena of mobile app development services. As per the report, smartphone users across the globe will rise to 3.8 billion by 2021. Isn’t it a huge number? However, most smartphone users use three different mobile platforms - iOS, Android and Windows.

Now the question gets more confusing when you choose the cross platform app development frameworks. That means there’s a big competition between Flutter Vs React Native Vs Xamarin.

As we know, with the rise of the mobile app market, the urge for creating the best mobile apps is also increasing. Therefore, every business is looking for developing an efficient mobile app, which won’t be possible if they have to distribute their resources on two different platforms.

And this is where cross platform app development services come into the picture. The framework emerges as the one-stop solution for questions like:

If you have come across such questions as well, then this article is for you. Let’s walk you through the comparison between Flutter Vs React Native Vs Xamarin.

Cross platform mobile app development comes up with several advantages that are otherwise missing in the native development services.

On the other hand, you will find some of the disadvantages too that make cross platform mobile app development slightly less effective as compared to native app development.

Let’s have a look at it. 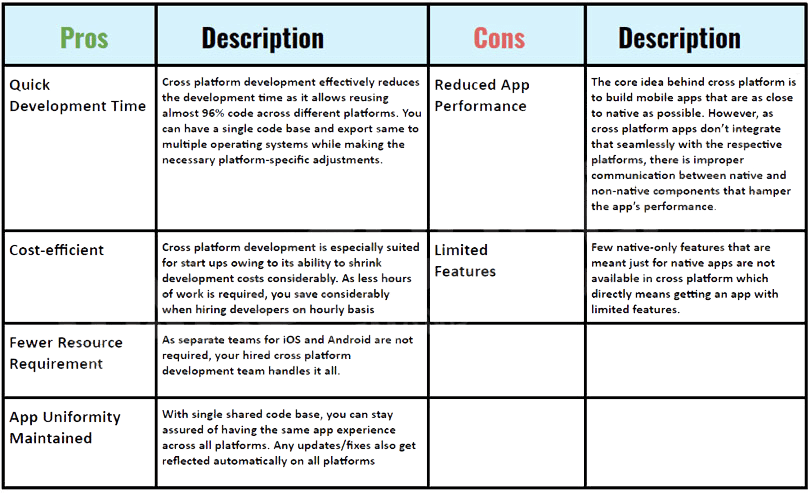 Every year comes up with the new rise of cross platform app framework, thereby disturbing the position of popular frameworks. However, there are three frameworks that have still remained the same on their spot. Those frameworks are Flutter, React Native and Xamarin.

Flutter is an open-source cross platform mobile app development framework created and maintained by Google in 2017. It’s one of the newest frameworks among these three and has gained popularity among frontend developers.

As per the survey, Flutter has left behind React Native in Developer Survey Results and become the third most loved framework (Flutter 75.4% and React Native 62.5%).

Due to the newest entry in the framework, Flutter poses a few challenges.

So, if you are looking to develop an app which runs seamlessly across all the platforms, then Flutter will be a good choice for you. You can also hire Flutter developers to develop a Flutter application.

React Native allows developers to code in JavaScript with few components using Swift, Objective C, or Java as and when required. It has become the developer’s favorite language due to its short learning curve.

React Native wins the search race as the most popular cross platform app development framework followed by a tough competition between Flutter and Xamarin, as per Google Trends. 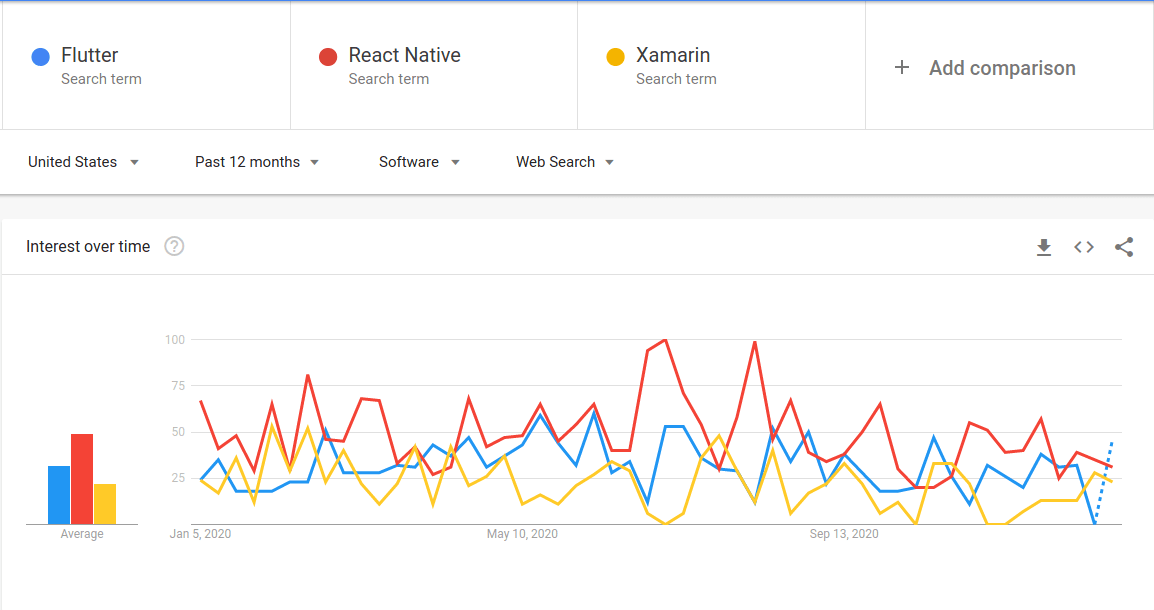 Unfortunately, React Native has its own drawbacks.

Xamarin is an open-source, cross platform mobile app development framework developed in 2011, making it the oldest of the three.

When we compare this Xamarin with React Native, well, React Native development was not the most preferred choice since its inception. It had to sail through the gigantic waves to reach the top-most position.

In the below graphic, we can see the difference between November 2015 to September 2016; the year when Xamarin topped the popularity chart leaving behind all other cross platform app frameworks.

In mod-2017, you could see a tight competition amongst React Native and Xamarin developers. And finally, in 2018, React Native pushed back Xamarin to obtain the first spot amongst the cross platform development frameworks. 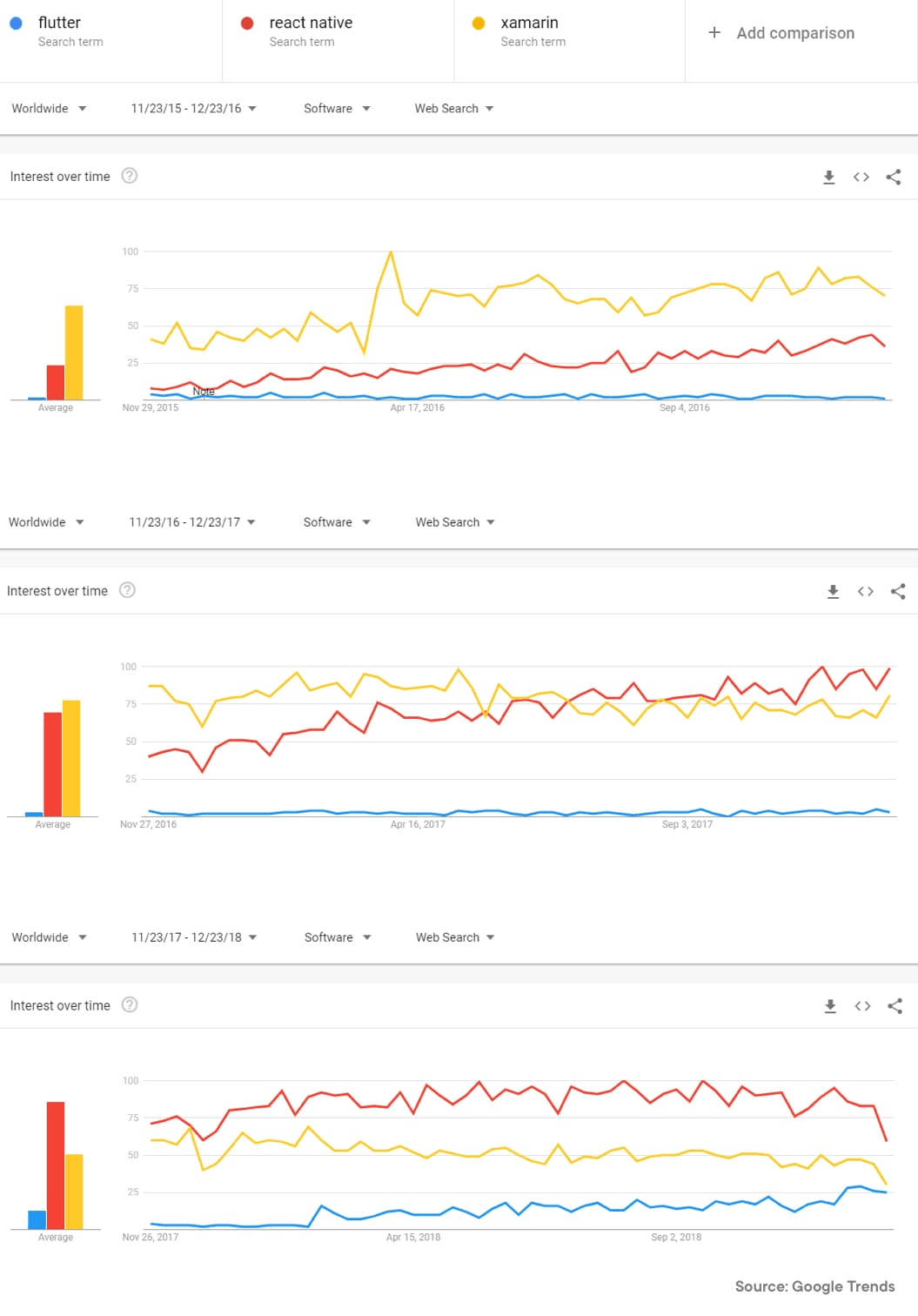 The advantages of Xamarin app development include:

Xamarin Disadvantages
Just like other cross-platform development frameworks, Xamarin also comes up with a set of disadvantages.

App performance is the most important factor you should consider while choosing the cross platform app development framework for the project.

Flutter is one of the best cross platform app development frameworks which allows developers to develop an app in quick time. Using native code, developers can have the native feel, thereby developing an exceptional user experience.

The reason why Flutter delivers the best and exceptional app performance is because of the ‘Dart Code’. This code is compiled to a C-library and eliminates the bridge of JavaScript.

Moreover, the ‘Hot Reload’ feature allows Flutter developers to see their changes made in the code within time as when using native technologies. It’s the preferred platform for developing MVP apps. 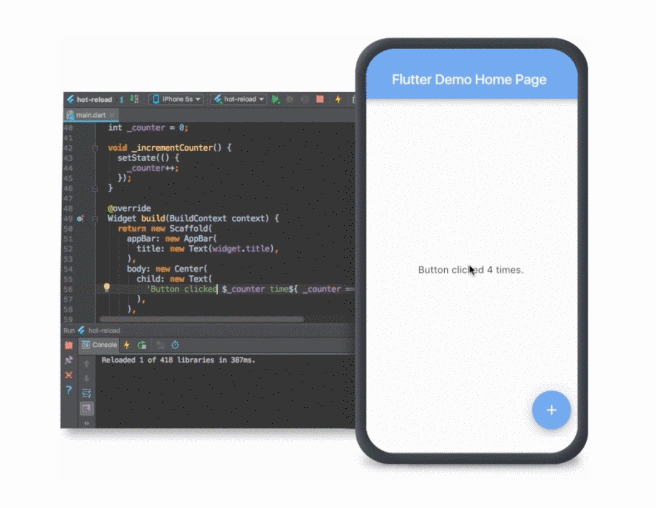 Flutter has plenty of widgets like navigation, scrolling, fonts, and many more. Therefore, it saves a lot of development time. Since the Flutter apps are developed using built-in widgets, hence, its size could be bigger. The Flutter app can weigh no less than 4MB.

React Native apps perform the same as native applications because of their ability to render code elements specifically to the native APIs. To develop complex applications, developers can use native modules written in native languages.

Since React Native leverages JavaScript, a concern for rendering the large datasets emerge.

The Xamarin apps match the standards of native app development, which can be inferred from the following graph: 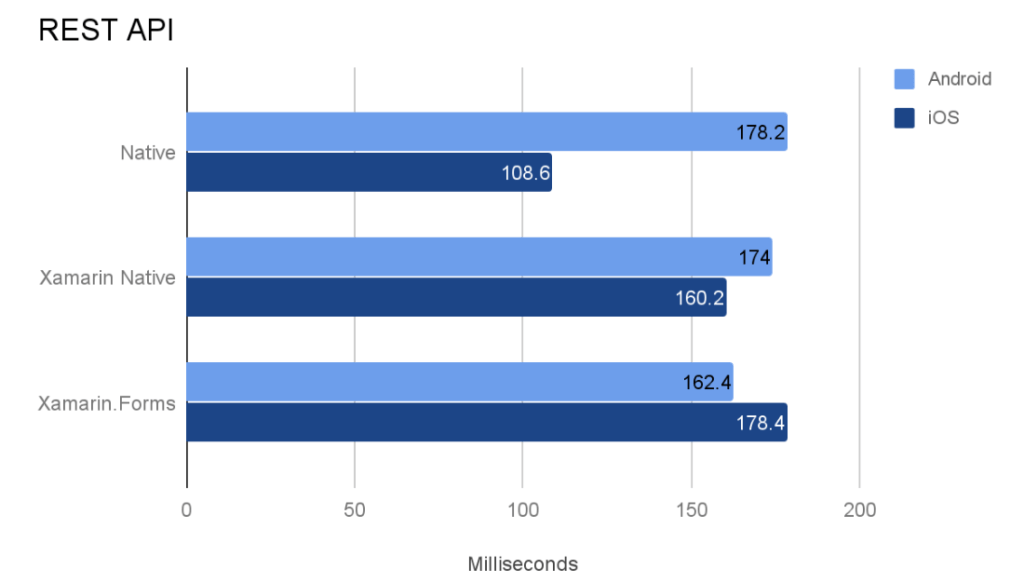 However, for graphic-rich apps, Xamarin is not recommended as it has a different method for visually laying out screens. It can help you develop UI/UX-rich applications.

When you choose the cross platform app development services, the architecture of that framework plays an important role.

When we talk about Flutter architecture, it supports the Reactive UI approach. It also packs a Dart application framework with unidirectional data flow which rises from Facebook’s Flux and RefluxJS. 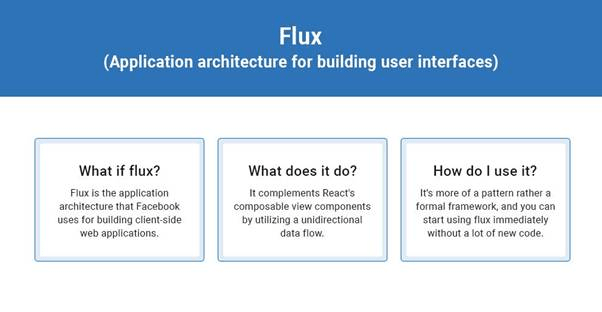 Since the Flutter app has a large size, the developers can get frustrated. Albeit, if you reduce its size, the application still remains larger than the other apps.

Because of the module and intuitive nature, developers can easily modify an existing project. 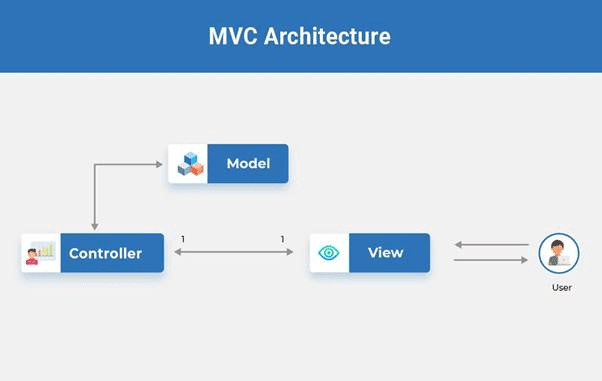 Having strong community support is the major support for every platform. The community has all the answers to your queries.

Flutter has good community support. It has over 110K stars on GitHub, which is very close to React Native. Also, they have 700+ contributors working to enhance the framework and provide the best development experience. Flutter developers are also active on different QA websites.

React Native was created when a developer community was looking for an alternative to the combination of Native React and better mobile application development.

React native has one of the best communities with over 92.6K stars and 3000+ contributors working to enhance the platform on GitHub. Hence, it has a large community of developers across the globe and they are very active on QA sites and forums like Stack Overflow.

When it comes to community support, Xamarin has very limited community support amongst the three platforms. What we think is that maybe the platform is not free, the users have to purchase this cross platform.

As a Xamarin developer, you will not find instant help and support from the Xamarin community on the Internet. Therefore, on GitHub, the number of users, repository, and contributors are nowhere near to the React Native framework. 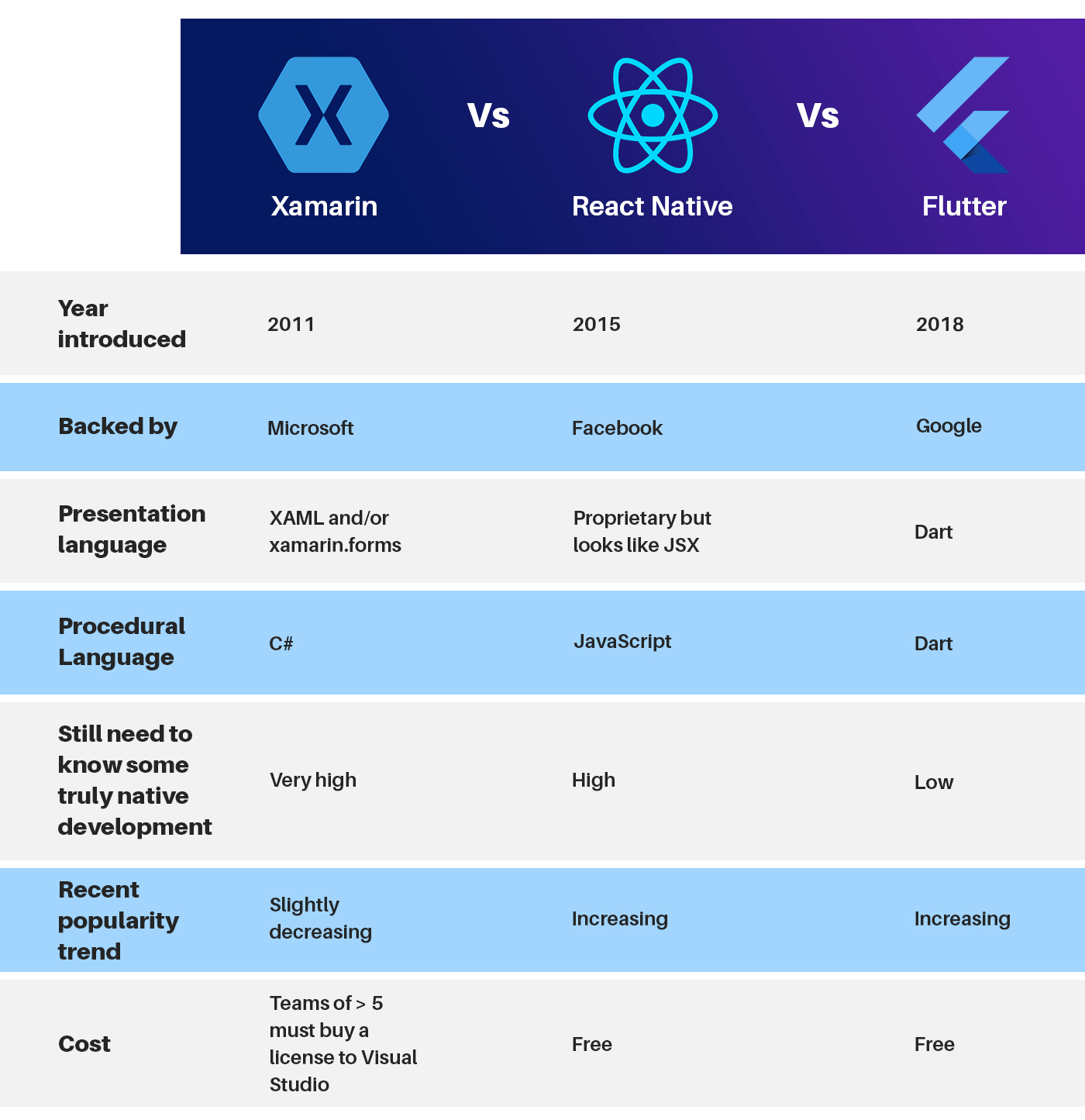 After reading this article from beginning to end, I guess, you might have got some idea about the relevant and best cross platform mobile app development framework for your project.

In a nutshell, Flutter app development companies are suitable if you want to develop an app in a quick time.

On the contrary, React Native is popular, simple, and has good community support. It could be a good choice over Flutter and Xamarin if you are looking for these qualities. We are a prominent React native development company who are updated with the latest trends and technologies.

So, what are your thoughts on Cross-platform frameworks? Let us know your views in the comment section below!