Golang vs Python: Which Programming Language Will Suit You? 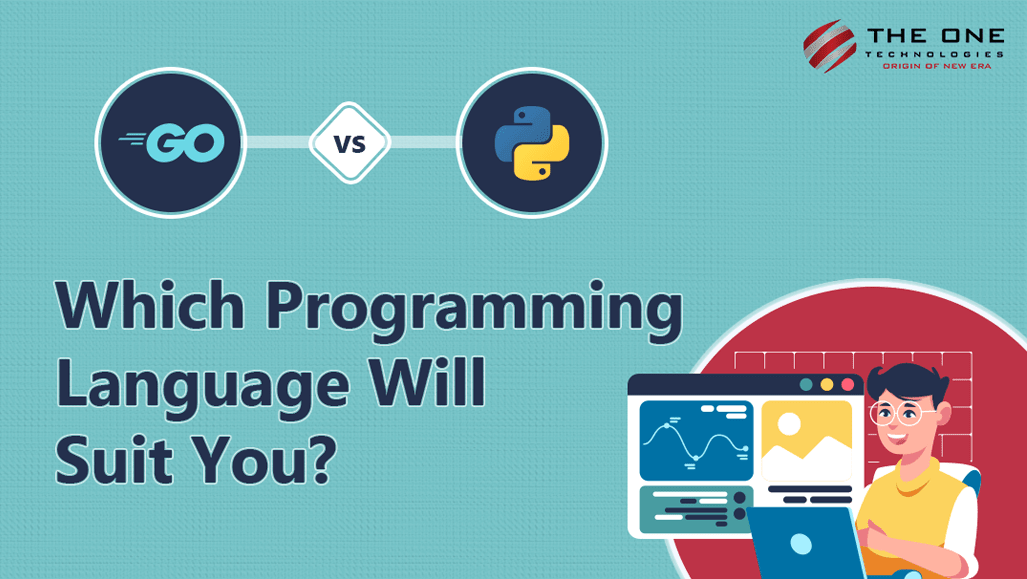 When you are on board to kick off the new project, the team of developers goes over several meetings to decide the suitable language. However, selecting the best programming language will always be a crucial decision for a custom software development company.

Before moving further for any project, the development team discusses the requirements for their development project. Albeit, we have a plethora of options to choose from, such as PHP, JavaScript, Golang, Python, and C++. Many times Go and Python becomes the first choice among the developers.

In this competitive world, the discussion between decision makers gets heated up to hire Python developers or Golang developers. But let us tell you, Python and Go have some appealing features to offer. And few functions may vary significantly. But, what makes these languages stack up against each other?

So, here comes the question.

However, there’s always a dilemma in the mind of developers.

So, in this blog, we will go through these two programming languages in detail and distinguish them. So, let me give you a brief introduction to both these languages.

An Introduction to Go vs Python

Developed by Google, the programming language - Golang is also known as “Go”. It came into the existence of the public in 2009. It also comes up with many additional features like method and operator overloading, typing indicator, type of inheritance, and pointer arithmetic.

Golang is the faster-growing programming language in 2019. As per the report by GitHub, the popularity of Golang is growing faster. It delivers excellent performance with lightning speed.

The unique features Golang has to offer are:

Despite having such great features, Golang has a few advantages and disadvantages.

Python is a general-purpose programming language, developed by a Dutch programmer, Guido Van Rossum. It was released in 1991. It has become a popular and widely used language in the web development community, especially for back-end programming. Python tops the list of language rankings by the IEEE spectrum.

In nutshell, Python is a programming language that is used for any type of project development. Therefore, it’s known as ‘Scripting Language’ as it was initially used for trivial projects.

Python enables developers to reduce the cost of development at the initial stage and saves time. Python has a pool of libraries to offer. It consists of TensorFlow, Pandas, Keras, NumPy, SciPy, and many more, which reduces development time. It offers a great developing environment to develop robust server-side applications.

Being the winner of programming language, Python development services also has a few pros and cons.

Until now, you might have understood the definition, pros, and cons of Go and Python programming languages. Hence, it’s time to distinguish them with basic features and functionalities.

A Quick Comparison: Golang vs Python 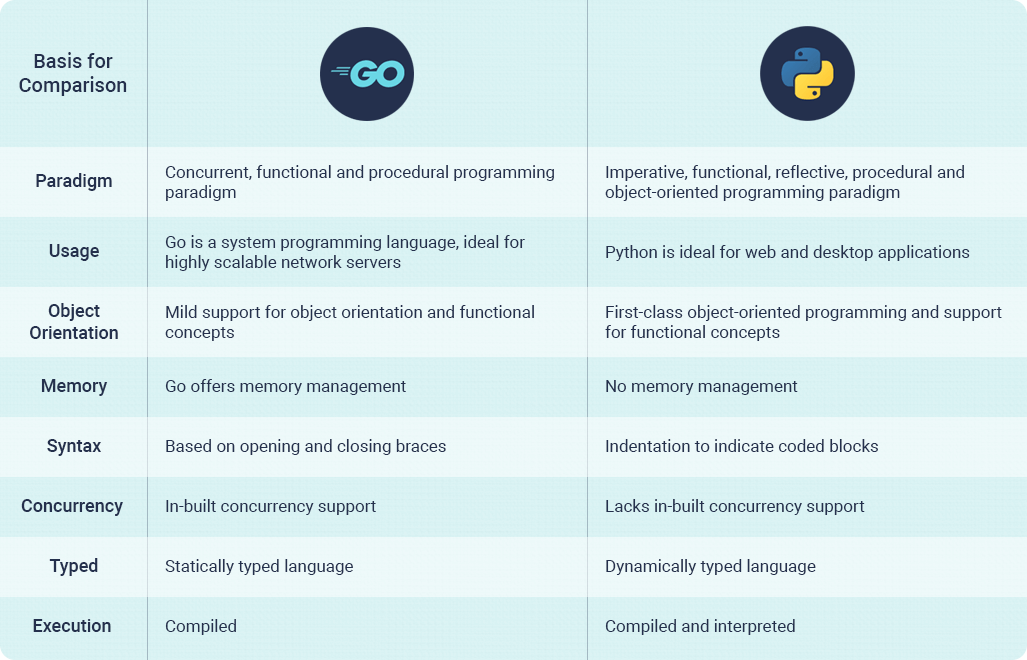 Let’s start with the comparison of the languages’ performance.

Go is a compiled language. This makes it interpret faster than Python. Even though Python is a compiled and interpreted language, it doesn’t give high performance as compared to Golang. However, Python enables you to develop an application in a limited amount of time.

Since Python has a pool of libraries, it performs efficiently for basic development tasks. Whereas, Golang has in-built libraries, which are more suitable for microservices software architectures.

When we talk about concurrency, Golang comes with in-built concurrency support. It utilizes the goroutines, which don’t require large memory. Whereas, there’s no inbuilt support of concurrency in Python, and depends on a concurrency library.

When we note down the comparison, how can we not include the scalability? It’s an important factor to consider when we are bound to choose these languages.

Golang came into existence while keeping scalability in mind. The major purpose was to resolve problems that involve thousands of developers working on a large server with many clusters.

Before proceeding further, let us make you understand what’s concurrency and parallelism.

Concurrency is when an application performs more than one task at the same time. In the application, the tasks are performed simultaneously.

On the other side, parallelism is when the application splits the task into smaller sub-tasks, which are processed parallely.

So, the difference reveals that Golang is suitable to inherit the support of concurrency if you have a large-scale project.

Code readability is a major factor that we have to consider.

For Golang, we have to follow strict programming rules. It doesn’t allow developers to import unnecessary libraries. This gives a better coding experience when a large number of developers code.

You should be aware that each programming language has its own objective. For example, developers primarily use JavaScript for web development.

Python is used for Artificial Intelligence, data analytics, web development, and deep learning. Due to its full bag of libraries, it makes the development easier.

On the other hand, due to its support for concurrency, developers mainly use Golang for systems programming. Also, it is used for cluster computing and cloud computing.

Therefore, Golang has gained popularity in the IT industry, as it offers easy-to-use libraries and is a powerful language. This enables developers to set up the web server in a bit of time.

As we know, Golang has built-in libraries that can be used only to an extent. In this case, developers don’t prefer this language. Moreover, due to the absence of a required framework, developers face this challenge.

Now, when we talk about Python, it has a large number of libraries and frameworks that are directly available for developers. However, it has the most popular frameworks: Flask and Django. You should definitely not miss out on the comparison between Django vs Flask.

Python brings you an enriched set of libraries in particular areas like forensics and data science. This enables developers to have a quick prototyping process time. Therefore, Python tops as the popular programming language. Additionally, it has more libraries for data handling, web development, encryption, and concurrent programming.

Execution is the final point we have to consider while doing a comparison.

Now to understand why I talked about these two parameters, let’s understand the difference between these two.

In a statically typed language, variable types are declared explicitly to the compiler, even trivial bugs get caught easily. On the other hand, in a dynamically typed language, type interference is implemented by the interpreter. Hence, some bugs may remain. The interpreter might convey the messages in an incorrect way which might create some chaos.

In nutshell, if you are working on a large project, it’s advisable to use Golang. As developers won’t face any limitations.

I hope this article has given you enough information regarding Golang and Python with some serious consideration. So, if you are a developer, you should aim to get at least some level of understanding and experience in both languages. However, this will surely uplift your tech career.

So, we can say that both languages are evolving. While developers consider Golang in most cases, Python is not just sitting back and doing anything. Both languages are expanding and growing simultaneously. We are hoping to see many functionalities and features in the coming days.

So, if you are still confused about the programming languages yet, you can get in touch with web developer companies.