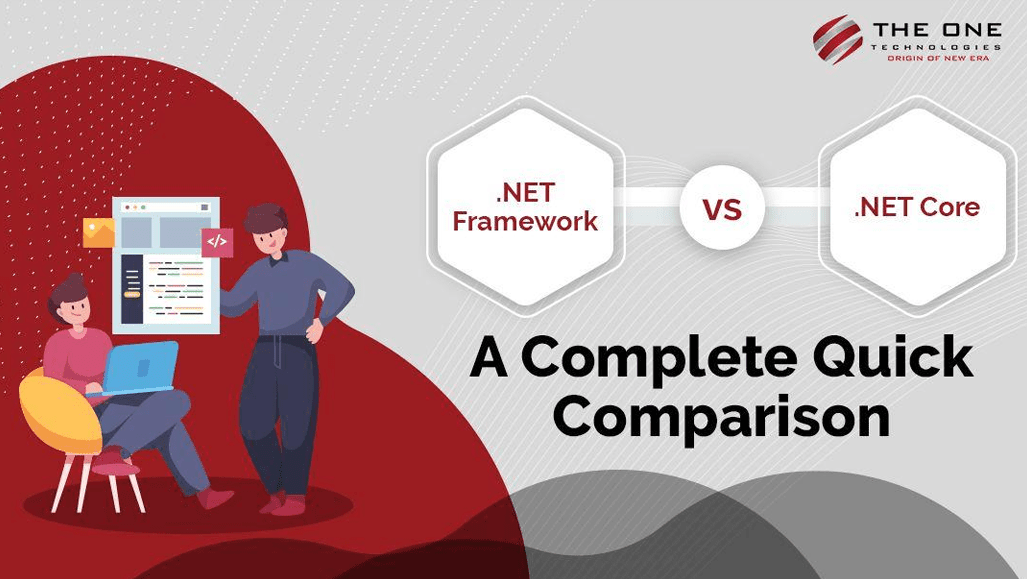 In recent years, .NET technology has made its mark among many developers. There is an increasing demand for skilled .NET developers in this technology. Obviously, .NET technology refers to both .NET Framework and .NET Core. With the increasing demand for .NET development services, companies are offering quality web development projects. Therefore, it’s the right time to invest in these two languages after having sufficient knowledge.

As we know, both .NET Framework and .NET Core have made their impression in the web development services. However, the debate is still on which is better in the long run. But you know what, this is a never-ending debate and will not lead you to a conclusion. But on the other hand, we know that .NET Core is coming up with new features and functionalities to simplify the development and testing of desktop, web, cloud, and mobile applications.

Let’s know what the trend has to say: 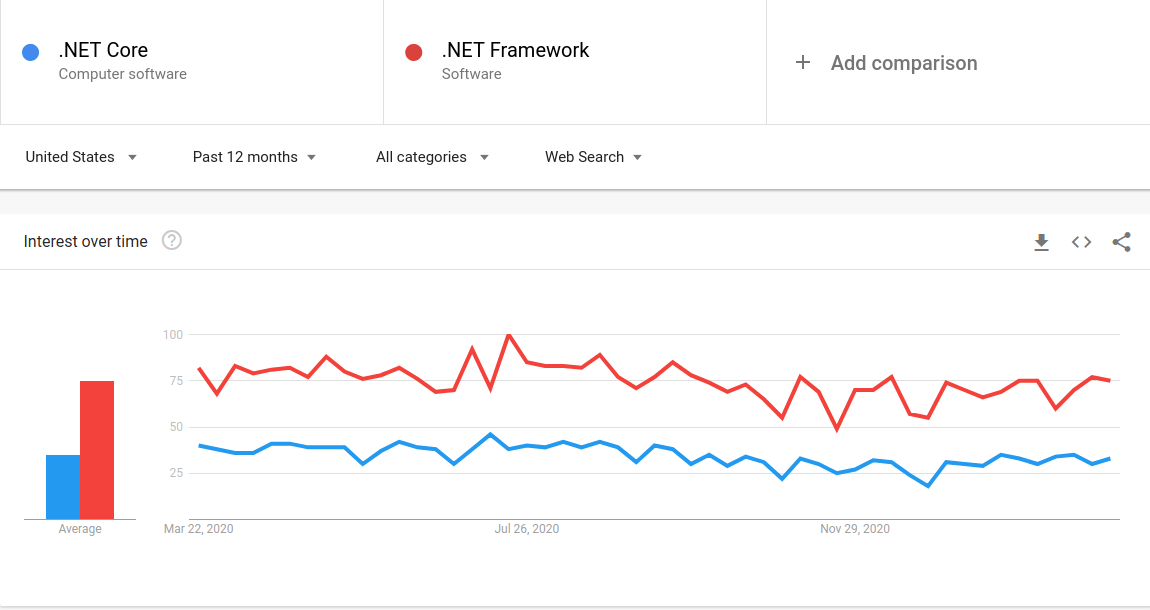 As per Google Trends, .NET Core development services is leading on the internet.

Well, to answer the above questions, we are coming up with a basic comparison. It will make it easy for you to choose one for web app development.

Let’s start with the basics.

Developed by Microsoft, .NET is a free and open-source software development platform. It allows developers to develop server-side applications. Using various tools and libraries, developers can develop applications and services much faster in a convenient way.

With .NET, you can make use of various languages such as C#, F#, or Visual Basic, libraries, and editors to develop web, gaming, mobile, IoT, and desktop applications.

To build server-side applications, we can find two frameworks under the umbrella of .NET technologies - .NET Framework and .NET Core.

.NET Framework is the initiation of innovation. Whereas, .NET Core is the modern and advanced version of the .NET family.

Both .NET Framework and .NET Core have similar components and allow developers to share code. But still, it creates confusion for some people while choosing the right technology.

Microsoft began developing .NET Framework in the late 1990s for the need for Next Generation Windows Services.

By the early 2000s, the first beta version of .NET 1.0 was released. As a result of the release of the .NET Framework, many frameworks were launched and updated in many advanced features.

Extensive Class Library: It’s a set of trails and tested reusable codes for all development stages that any developer can use.

The main objective of developing .NET was to create an easy-to-use object-oriented environment, which could be leveraged by multiple languages. But, being closed source, users migrated to open-source platforms. Thus, to survive in the competition, Microsoft came up with the .NET Core as an open-source platform.

.NET Core is an open-source and cross-platform framework. It’s used to build applications for Windows, macOS, and Linux operating systems. For .NET Core, developers can use C#, F#, and Visual Basics to write applications and libraries.

The first major version of .NET Core was focused on developing high-performance web and microservices. And, to create version 2.0 more rich, multiple APIs and components were integrated to ease the migration of web applications to .NET Core.

The option you choose - .NET Application Development and .NET Core Development completely depends upon your requirements, budget, type of application, and platform on which it is to be launched.

However, we have to consider a few factors for the next project.

.NET Framework is used to build Windows Desktop applications and server-based software on a single platform. The language compilers ensure that programs written in one language can be assessed and compiled in other languages as well.

Since .NET Core is open-source, both individual and enterprise developers can build apps without paying any licensing fees.

However, it has the option of Xcopy deployment, which copies files to the intended directories. Small applications work well with Xcopy, but migrating complex apps requires more steps and are tedious.

.NET Core offers a flexible and accessible deployment model. With the latest release of .NET Core, it gets deployed instantly and automatically without affecting the existing files. It gets uploaded in the new directories one at a time and in one machine.

.NET Framework is not as fast as we think. It doesn’t have a nature of flexibility and security. During the deployment of the application, the .NET Framework compiles the CIL code into executable code using its just-in-time compiler. It caches the executable program into the .NET Native Image Cache to speed up the first launch.

.NET Core is more effective than .NET Framework. It enables developers to boost the app performance significantly without using any additional hardware.

Thus, .NET Core enables developers to develop faster and scalable applications without having any trouble.

.NET Core can leverage the robust class libraries, but it even uses a redesigned common language runtime called CoreCLR. Here, developers can pick and use any libraries as per their choices. Also, they can remove unnecessary libraries. 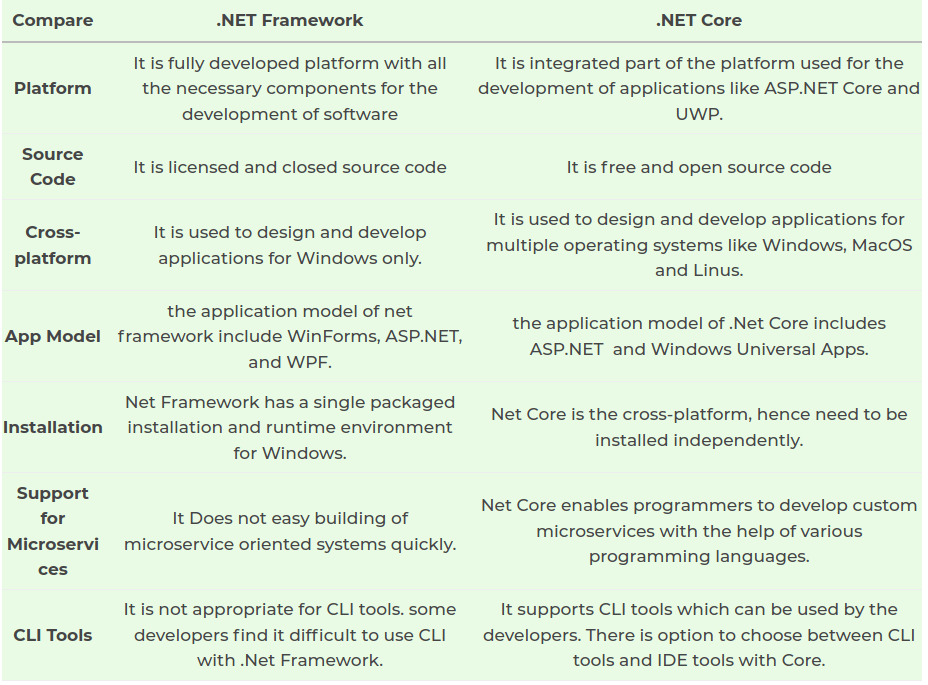 .NET Framework is a better choice when:

If you are a .NET developer who is looking to build and release .NET technologies in a very short time, then .NET Framework is the best choice.

On the other hand, .NET Core is difficult to learn. It needs time to get used to it. However, if you wish to upgrade your apps in the .NET technologies quickly, the .NET Framework with .NET Core porting of the app is the suitable choice.

.NET Core is a better choice when:

What Is Right For Your Project?

Existing applications are always safe and secure to remain on the .NET Framework.

However, existing applications can leverage the new features and functionalities by migrating to .NET Core. And if the components are supported on .NET Core, it’s advisable to stick to the .NET Framework.

So, now, let me ask you a question. Are you still not clear about choosing the right runtime for your software?

Well, we can help you with that as well.

As a renowned ASP.NET Core development company, we are offering seamless services to SEMs, enterprises, and Fortune 100 companies.

Are you looking for a .NET Development company? Let us know your requirements and our experts will help you.

If you find this blog useful and are curious to know more about asp.net web development, please go through the below-mentioned blogs.