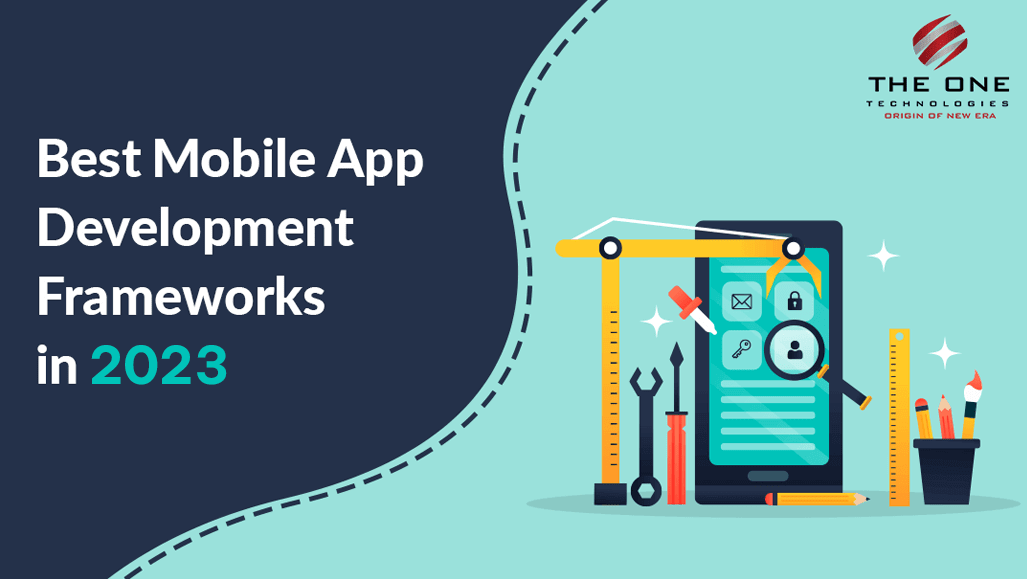 With the advent usage of smartphones and the increasing number of mobile users across the globe, many business owners and entrepreneurs are focusing on developing mobile applications for their businesses. By marking its presence in the digital world, the mobile application development market has achieved an unparalleled CAGR of around 23.8% and is expected to reach $366.93 Billion by the end of 2030.

Well, if you look at the current market trends and understand the scenario, the ruler is a Mobile Application. Mobile apps have plenty of advantages of being faster and more efficient with the power of working offline and easily. The features and characteristics of mobile apps have forced many organizations to switch from Web App to Mobile App. By leveraging mobile app development services, your business can reach the peak of success. However, behind feature-rich and successful mobile applications, there are Mobile App Development Framework such as Flutter, React Native, Xamarin, etc play a vital role. Due to frameworks, the app’s functionalities and features have won the heart of users.

In this competitive world, to make your mobile app a real success, it’s essential to choose the right and suitable mobile framework, platform, technologies and databases for your project. However, choosing the perfect mobile app development framework with the appropriate development strategy is very important. This will surely lead you to overall business success.

Let’s read it together.

Here are the top 9 mobile app development frameworks that can help you build a successful mobile app for your project.

React Native is one of the most popular and the best JavaScript library which is used to develop both Android and iOS applications. Using React Native, you can develop native applications for all devices and platforms. It’s a free and open-source cross-platform framework developed by Facebook.

With React Native, developers can develop high-performance apps with faster deployment time in a short period of time. It uses JavaScript and assists in developing rich, intuitive, and amazing apps. It has gained popularity in the topmost mobile app development frameworks in 2021.

React Native provides a core set of platform-agnostic native components like Views, Text, Images all mapped to a platform’s native UI building block. It supports JavaScript which is a must for full-stack development.

Flutter is an open-source mobile app SDK that was launched by Google. It’s Google’s UI toolkit which is used to develop beautiful, natively compiled applications for mobile, web, and desktop through a single code base.

Flutter has its widgets that include all critical platform variations, namely scrolling, navigation, icons, and fonts, and eliminates dependency on platform-specific UI components. Flutter uses ‘Skia’ for developing visuals which is a 2D rendering engine. Hire flutter developers from The One Technologies as they have some best flutter developers.

Xamarin is an open-source and cross-platform app development framework developed by Microsoft for creating the best mobile apps by using a software framework, .NET, and programming language C#. It provides a flexible native performance that empowers businesses to deliver a unique user experience to their customers.

It’s an abstraction layer that controls the communication between shared code with underlying platform code. It allows developers to develop an ecosystem with backend, API, components, etc. It’s supported by various tools, libraries, and programming languages. It allows you to develop applications with the support of an active community for Android, iOS, macOS, watchOS, tvOS, and Windows.

Ionic is a completely free and open-source framework built with Angular and Apache Cordova which allows developers to develop an app for three different platforms - iOS, Android, and Windows. It’s used to develop cross-platform mobile applications for seamless mobile performance. Every mobile app developer companies uses this framework to develop a robust and feature-rich native application.

The major advantage of the Ionic framework is that mobile app developers can use several UI elements in their application design. These UI elements are list views, filters, forms, action sheets, navigation menus, and tab bars. It allows developers to develop high-performing and interactive Hybrid, Progressive web applications, and cross-platform mobile applications.

Ionic framework can turn out to be the best one if a developer is well-versed with HTML, JavaScript, or CSS.

With the Mobile Angular UI framework, developers can use JavaScript libraries like Overthrow.js and FastClick.js. This framework is perfect for modern web and mobile applications.

It provides the best experience to users with some of the useful components of this framework such as overlays, switches, sidebars, scrollable areas, etc.

JQuery Mobile framework is also referred to as an HTML5-based UI system that programmers use to build highly responsive applications for desktops, tablets, and smartphones. It is one of the most favored mobile app development frameworks that offer customizable themes.

Furthermore, it carries extensive support for Firefox, including Windows, Kindle, MacOS, and Blackberry.

Corona is a free and open-source cross-platform framework for designing mobile apps related to games for mobile devices, desktops, tablets, and smart TVs. It’s powered by a Lua-based framework lightweight scripting language that offers speed, ease of usage, and flexibility to develop apps.

Corona SDK is a popular and best choice for developing cross-platform mobile apps in a short time. It will work effectively with various platforms, including iOS, Android, and Nook.

It is an open-source framework that uses Typescript, Angular, JavaScript, CSS, and Vue.js to develop the best native mobile applications. Native Script is a flawless framework to develop apps while cutting down on the code length and app development time. Native Scripts are effective and offer some great built-in elements empowering the platform among many prominent companies.

Here are major characteristics of the Native Scripts:

We are recognized as one of the top mobile app development companies by TopDevelopers.co

It is one of the frameworks through which you can develop a perfect mobile app. The best part is that you can create an app on your own as it doesn't require coding, and the app can be made at a minimum cost. There are some other features of the Swiftic mobile app framework:-

A famous app built on Swiftic:

Frameworks are the most important and useful tools for developing any web or mobile application. Moreover, the above-mentioned frameworks are ruling in 2022 and will continue to rule in 2023 as well for high-end app development. If you are a developer, start using these frameworks for better, feature-rich, and robust mobile apps for your project. You will surely find it extremely interesting and easy.

2023 will definitely see the emergence of many well-known frameworks, but the above 9 frameworks are at the top of the priority list of mobile app developers.

So, if you wish to develop an app using fewer resources and time for your business, as an experienced mobile app development company, we will help you develop a mobile app for all devices and platforms.

At present, React Native is among the most popular mobile app frameworks. The accessible framework is essential in the software industry as they allow you to develop mobile apps for iOS and Android devices.

Xamarin and React Native framework is the best JavaScript framework for building native apps for any platform and operating system.

Python, Java, Flutter, React Native, Swift, and Kotlin can be used to create a mobile application. These technologies are considered the top mobile app technologies for robust app development.

Also, check out these projects developed by us: