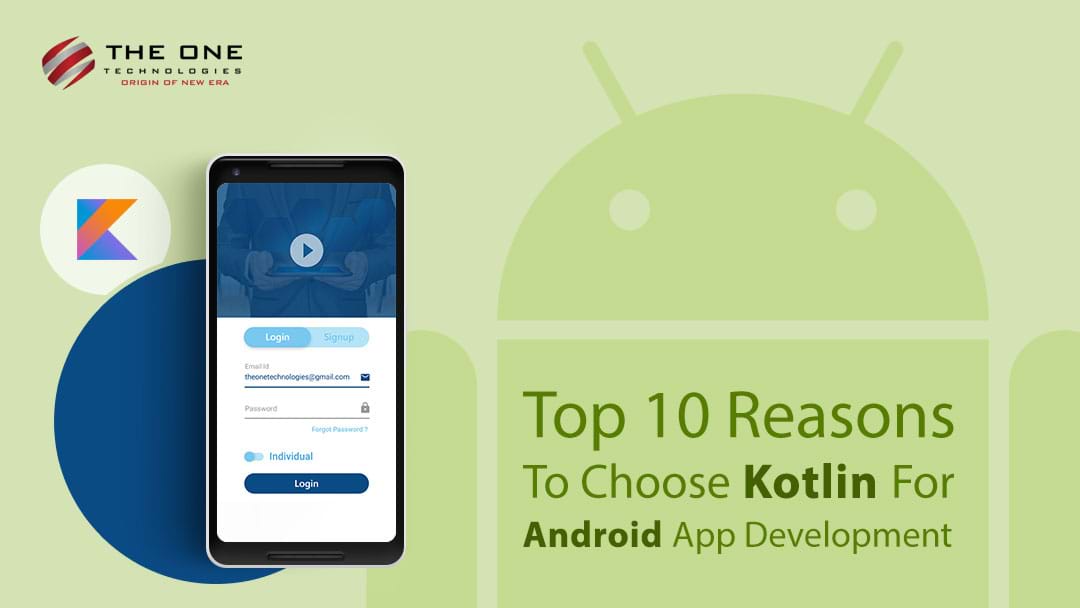 Java 8 has some of the useful features which were not utilized or allowed to use by Android. Thus, developers were stuck in the old Java 7 and 6. This is where Kotlin comes in.

Developed by JetBrains, Kotlin is a cross-platform programming language, which complies to the Java Virtual Machine (JVM) byte code. However, it’s been three years now, and since then the popularity of Kotlin has only increased. It’s easy to adopt and one of the fastest-growing languages after Swift. This is the reason, Kotlin is a great fit for Android applications and Android app developers, bringing all the advantages of a modern language to the Android platform without introducing any new restrictions. Android app developers are now relying on this Kotlin due to its less maintainable, concise and error-free features. It’s also quite safer than the Java language. The IDE (Integrated Development Environment) plugin allows developers to enable many features than Java. It also allows the app to work faster and smoother.

However, here, we will mention the reasons why you should choose Kotlin for Android app development. Let us take a look at the key benefits as below.

Reasons for Choosing Kotlin for Your Android App Development

Now Kotlin comes up with easy setup feature. Before, developers were forced to use a plugin to add Kotlin into their Android projects. But now Android studio 3.0 comes up with an in-built feature of “Support Kotlin Development”, which has become a whole lot easier. You just need to check the ‘Include Kotlin Support’ box while configuring your new project in Android studio and you are done then.

One of the greatest strengths of Kotlin is Interoperability. It’s completely and 100% interoperable with Java. The beautiful essence of this feature is that it allows developers to use Java and Kotlin code side by side in the same project without disturbing any of the factors.

This means if you are planning to integrate Kotlin in your existing project, you are just required to add its tools and frameworks without any additional changes.

Kotlin is an open-source programming language which reduces the time with converting existing Java code in a single-click tool. Being an open-source language, Kotlin supports core product development.

Nobody likes to write lengthy lines of code. Right? This is another feature Kotlin providing to developers. Boilerplate code is code that you need to write again and again with no alterations. Thus, Kotlin reduces boilerplate code. With the help of various handy tricks and methods, Kotlin reduces the extra lines of codes and create a relatively smaller file size. The reduced amount of code is almost 20%. The fewer lines of code will enhance the speed of your app development lifecycle.

Also known as ‘the billion dollar mistake’, NullPointerExceptions (NPE) has been one of the most common causes of app crash. It removes the null reference from the code. It’s a quite time-consuming and tough task for developers to fix the NullPointerExceptions and protect your code using null checks. But by utilizing Kotlin, NPE is a thing of past as null safety comes baked into the language’s type system. And this lets you catch the NPEs during the compile-time instead of the app crash at runtime.

Kotlin allows you to write less and hassle-free code than Java. It’s one of the most significant advantages of using Kotlin for Android app development. This feature is really valuable for the developers because while handling the Java programming language NullPointerException takes place lots of times and certain elements used to test the software quality will decrease the development speed and efficiency.

The developers - JetBrain had aimed to make the Kotlin languages simple. So, developers can easily understand the majority of the code even without having written a line of Kotlin. By its nature of simplicity and with the help of IDE & compiler, it has become easier to handle the basics of the language.

Kotlin is a better and enhancement version of Java which comes up with major improvements for the Android app developers. As far as creating classes and several syntaxes are concerned, Kotlin is much easier than Java and offers more security.

A big thanks to byte code structure which allows a Kotlin application to run faster. With the support of Kotlin for inline functions, Kotlin increases the execution speed of lambda functions. It even runs faster than the same code written in Java.

Compared to Java, Kotlin provides a wide range of handy features that expedite daily development tasks. The Kotlin consists of various features like parameter values, object declarations, extension functions, and many more. This allows Kotlin to speed up the development time, along with maintaining the code base efficiently.

Since its development in 2011, primarily, Kotlin was developed to solve practical and real-world problems of modern-day developers and programmers. This makes Kotlin an enterprise or commercial language. It’s built and developed keeping the enterprise in mind.

This is the main reason why JetBrains decided to offer something that is usable and cost-effective to enterprises which could be benefited for Android app development.

9. Much Safer Than Java

When safety is concerned, Kotlin is much safer than Java. Kotlin enables the prevention of the occurrence of common programming errors by design, which results in fewer system failures and application crashes.

When developers write any code in Java, they are likely to make errors. But when it comes to Kotlin, it pushes developers to write robust code. Android developers are powered by the null-safety feature. So, the variable in Kotlin code cannot hold a null value unless marked “nullable”.

You will definitely find bunches of resources, forums, and sample projects, etc and, therefore, you will not find yourself alone in the market. With the help of inlining, Kotlin improves its performance which is not possible by Java.

Till now you might have definitely got an idea of how Kotlin has pushed and helped Android developers to create robust Android applications with easy touch and developing. However, many Android app development companies have started adopting the Kotlin language, thus, it’s a really good chance of increased demand of Kotlin app developers in the near future.

So the time has come for Java developers to walk along with the technology and try their hands on Kotlin and embrace new opportunities in Android mobile application development.

At The One Technologies, we offer an excellent Android app development services to our valuable clients. Our Android app developers are dedicated to offering creative and high-quality Android mobile applications to various clients ranging from start-ups to large enterprises. So, Hire Android developers today and leverage our best services!