Trending Programming Language to Learn in 2022 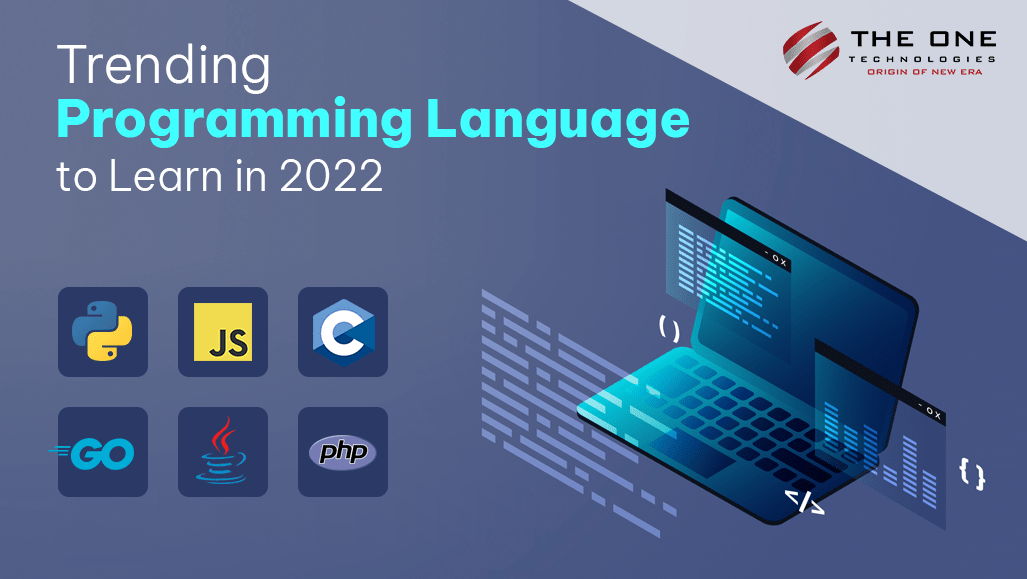 It wasn't that long ago when computer programming was an almost unknown and secluded field. Back then, there used to be only a few people who had the advanced coding skill set to be considered computer programmers.

But today, information technology is evolving at a faster pace than ever before. In parallel with the rapid development of the IT sector, there is a rapid growth in the market demand for specialists.

If you’re also among the many who want to enter the software development industry but are confused about the programming languages employers expect, then you came to the right place.

Although there’s no single “right” way to begin your career as a programmer, the first step usually involves identifying popular, relevant, and trending programming languages in the industry. You’ll start from there and build your career up as you advance.

This blog will outline the top 6 trending programming languages to learn in 2022 and equip you with some tips to choose the best one.

Top 6 Programming Languages Worth Learning in 2022

Python, JavaScript, and Go were the three most popular languages on Stack’s Most Wanted lists in 2019 and 2020. Meanwhile, languages like C and PHP are still in high demand even with the introduction of new programming languages.

Here is a list of the six most useful programming languages you may want to spend time learning this year.

Generally, Python is seen as an easy-to-learn software language thanks to its simple syntax, extensive library of guidelines and toolkits, and its compatibility with other prominent programming languages, including C and C++.

Its popularity is demonstrated by its ranking in TIOBE and PYPL Index in 2021: Python was the leading programming language. Companies like Intel, Facebook, Spotify, and Netflix are still using the best python developers to take advantage of this language’s extensive libraries.

Note: TIOBE (The Importance of Being Earnest) scores are determined by counting the results of major search engines like Google and Bing.

High-level languages like JavaScript are among the foundational components of the World Wide Web. According to the Stack Overflow coding language survey, JavaScript was the most popular and the third most sought-after coding language in 2021.

Developers can use JavaScript together with Node.js to build web content on the backend before a page is delivered to the browser, making it possible to build games and social networks that run directly on the web.

Cons: a little difficult to code in, a somewhat slow code.

Programs developed in the C language can be easily transported to many platforms - thanks to the availability of its compilers.

In addition to Python and Java, C provides a solid foundation for finding out how to program. In addition, C is remarkably fast when it comes to executing programs.

Cons: As opposed to most modern languages, C has a rather complicated syntax.

GO (or technically known as Golang) is an open-source programming language that is used to write efficient software. Google began using this technology in 2007 to develop robust APIs and web apps.

Since it took 19th place in April 2018, it has maintained its rank on the TIOBE index.

In recent years, GO has become one of the trendiest programming languages for several reasons, including:

Although GO is somehow similar to C in syntax, it’s a unique language that offers excellent memory protection and management functionality. It is likely that GO’s popularity will continue to rise as it’s used to design systems that use artificial intelligence, just like Python.

Cons: GO is still a relatively young and undeveloped technology. It has problems with error handling and dependency management.

The object-oriented nature of this general-purpose programming language has made it a preferred language for applications on any platform (e.g., Windows, Mac, Android, iOS, etc.).

It's no wonder Java is so popular; getting started with this language is fairly simple, and it boasts a high level of security. Furthermore, it’s capable of handling large amounts of data.

The technology is used in a variety of applications on almost all major systems like mobile, desktop, web, artificial intelligence, cloud applications, and more.

Cons: Java consumes a lot of memory and is much slower than native languages like C.

PHP is a very commonly used scripting language. It was one of the first server-side languages to be integrated with HTML to improve website functionality. PHP developers are still in high demand, regardless of the current online trends.

According to the numbers, almost 22% of experts around the globe rely on PHP. You can hire PHP developers to create a shopping cart application for your eCommerce website or build online communities.

Additionally, PHP is considered to be a relatively easy language for novice developers to pick up.

Cons: not suitable for large applications; does not handle errors well.

How to Choose the Right Language

JavaScript will be the most widely used programming language for the tenth consecutive year in 2022. However, novice coders have a different point of view about codes like JavaScript.

People who want to learn to code are almost evenly divided between HTML/CSS, Javascript, and Python. Although, there are many advanced and beginner-friendly languages like GO you can invest in too.

So, how should one decide which trending programming language to learn first?

As you consider your options, you should weigh several factors like:

Whether you want to write a mobile app, obtain programming certification, or expand your knowledge, you need to learn the right programming language first.

To remain competitive in this ever-changing business environment, you need to keep your team skills polished and up-to-date.

It’s necessary to remember that different programming languages should be tailored for different purposes. Therefore, it’s important to know what type of developer you actually need before employing someone to do the technical work. A credible software outsourcing company can help you find the right solution.