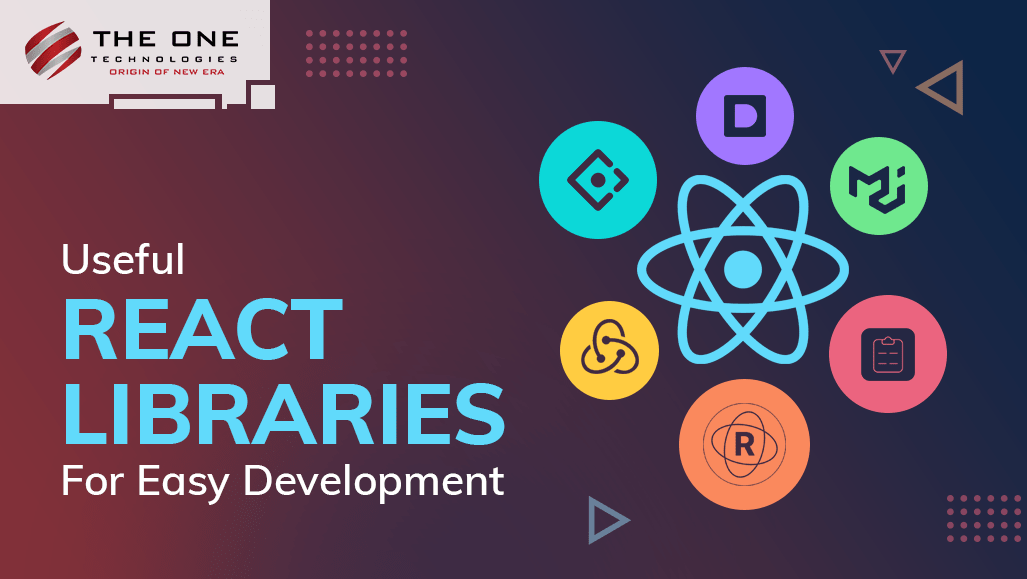 Several years have passed since React was introduced. Numerous component-oriented libraries have emerged since then, creating a well-rounded but confusing environment for new developers.

Developers can have more control over UI design and performance with JavaScript frameworks, the predominant technology for front-end development. It’s important for you to have a general understanding of how these libraries work, even if you don't have the relevant skill set to work with them.

Do you want to learn more about React libraries and improve your app? Below, you’ll find a list of the six most useful ones we’ve listed for an easier development process.

A JavaScript library called React enables you to create top-notch UIs for web and mobile applications. Nevertheless, React focuses solely on state management and rendering. As a result, React applications usually rely on third-party libraries for routing and client-side features.

React is primarily used to design component-driven user interfaces by leveraging function components. A solid understanding of React's fundamental concepts is only part of becoming a successful React developer; you also have to have a good grasp of its ecosystem.

Having some familiarity with various React libraries allows you to make your development process easier by incorporating them into your application.

Let's look at six React libraries that are a valuable addition to any React project you're planning to build in 2022 and later.

Starting with the most popular option, React's MUI Core offers easily accessible and customizable UI components and is recognized as one of the most trusted libraries.

Developers can use MUI Core to create applications using well-designed, easy-to-use, and flexible components. This tool offers a comprehensive set of readily available features that can be integrated into any project.

When it comes to creating visually appealing React apps, few can be as helpful as Ant Design. Ant Design most likely has any component you might need for your React app interface or design.

The Redux library is an open-source state management library written in JavaScript. It's a state management tool and standalone library, with over 58K stars on GitHub and over 7.8 million weekly downloads on NPM.

Redux simplifies the process of connecting React components to items of state by reducing the use of props or callbacks. Redux is most commonly used with React UI library components, but it can also be integrated with Angular 2, Vue, Mithril, Vanilla JS, etc.

React developers have long used Redux to manage the state in their applications. Developers often call this library their "bestie" because it offers the following features.

The React DnD library helps you create sophisticated drag-and-drop interfaces while ensuring that components are independent. Using gestures and grabbing, users can pick up objects and drag them to any preferred spot on the screen.

While there are dozens of excellent drag and drop libraries, React DnD stands out because it uses HTML5's drag and drops API.

It has many unique and creative applications in real-world scenarios, making it relatively easy to use. React DnD encapsulates your components and insert props into them instead of giving you a set of pre-built widgets.

Forms are one of the fundamental parts of a web app and React Hook Form is top of the line when creating forms in React. This library simplifies form validation by synchronizing the UI with HTML specifications.

All the features you need in a form library are available in one straightforward hook called “use form”. Performance, adaptability, and simplicity make it an excellent choice.

Additionally, it is very light and has no outside dependencies, which helps developers get more done with less code.

Rebass is a barebones UI component created with a customized system to fit the expectations of the React programming framework. This compact package is composed of only eight foundation elements optimized specifically for responsive web design.

Rebass's props API simplifies and speeds up the process of creating responsive web apps based on a configurable style system. Because Rebass only provides presentational components, it can be used in any application architecture that supports server-side rendering.

Rebase also has the following features.

This article aimed to list the most useful and straightforward React libraries that cater to specific needs within the ecosystem. Of course, this list of libraries is far from complete. The world of JS is still full of interesting things to discover.

Developers or IT companies should keep up with the most recent news and trends in their chosen technology fields.

Draw upon React libraries’ different components to build your ideal application with a team of skilled and knowledgeable React developers who can offer the best solutions for your project needs.

Enjoy the endless supply of React Libraries at your fingertips by getting in touch with our ReactJS Development company.