Which Are The Best Android Frameworks in 2021? 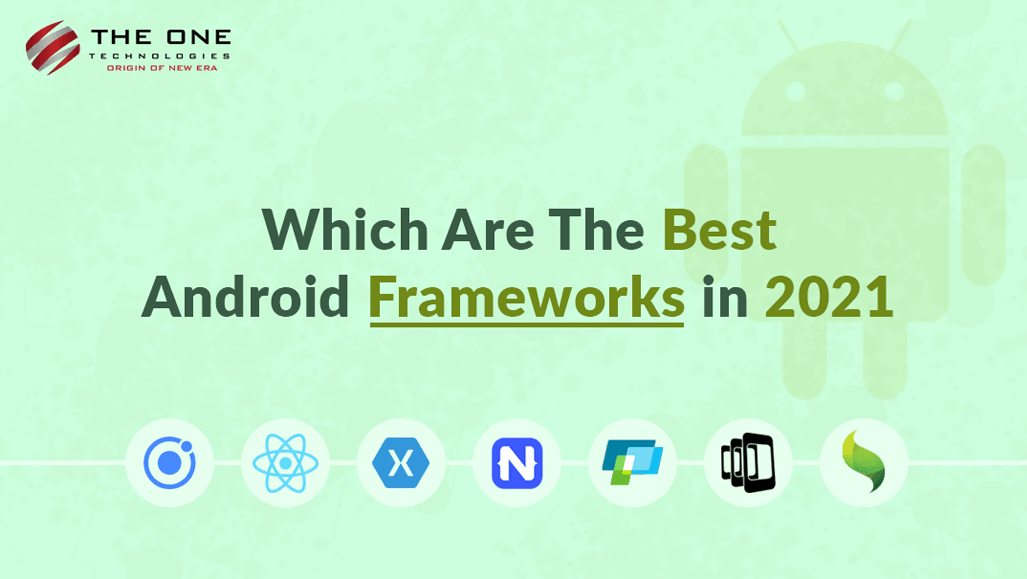 With a whopping user base of 2 billion people and near to 1.5 billion downloads every month, Android has taken its number spot for mobile operating systems. So, whenever there’s a battle between Android and iOS app development, Android also wins the battle by providing several Android app development frameworks.

If you are looking to develop customized apps, Android is considered the most preferred platform. Android offers an ample of Android app development frameworks that empower developers to develop apps in a short time - even without having to code.

So, you must be wondering, what are these frameworks?

Do you wish to know which are the best frameworks to develop the Android app?

As a top-notch Android app development company, we are coming up with the best Android app frameworks which might help developers to develop apps very quickly.-

Using the Ionic framework, developers can easily develop hybrid and interactive mobile apps for their customers. It’s the most developer-friendly framework, having a rich toolset of elements, gestures, and animations. This allows developers to develop high-quality mobile apps, desktop apps, and PWAs from a single codebase.

It lets you view and manage all the Ionic apps in one main, shared dashboard having live activity modules for seeing how the development process is progressing.

React Native is an open-source mobile framework that was developed and launched by Facebook in 2015. It allows you to use the React framework along with its native capabilities for developing mobile - Android, and iOS, and Web applications.

React Native makes use of the same UI building blocks that you use while developing an Android app. What developers love about React Native is that it uses Java or Swift or Objective-C programming language for Android app development.

Many organizations and developers have adopted this framework because of its constant support for IDEs, third-party plugins, and development tools, etc. Therefore, many big companies like Tesla, Instagram, Walmart, Baidu have been using this framework to develop their apps for different platforms such as iOS, Android, UWP, and Web.

React Native uses native platform-based interface components and APIs that are built-in for including a natural look and feel. It gives you proper solutions like codebase differences, imperative programming and iteration period.

Flutter is a free and open-source mobile UI SDK framework developed by Google, which allows developers to develop unique apps compared to other frameworks.

It’s preferable for hybrid app development, as it uses a single codebase. It allows developers to test, perform UI, unit and functionality testing without having any errors. The hot reload feature of its, is used for continuous testing without restarting the application.

Due to its multi-platform development process, developers can easily develop native interfaces on Android and iOS devices quickly. Flutter is written in the Dart language and works with existing code to help developers in mobile app development.

Developers who are willing to build apps in native code using C & C++ will choose Native Android. It provides full flexibility in developing innovative and amazing apps and games for mobile devices.

Xamarin is one of the open-source and cross-platform to build modern apps for iOS, Android, and Windows with the .NET framework. It allows developers to develop a native app with a single C# codebase for every key mobile operating system.

With a friendly development environment, it allows developers to develop native apps, having a code written in C#  or XAML. You can use the same language, IDE, and APIs on every platform.

Whatever you do in Swift, Objective-C or Java framework, you can do the same thing in C# with Xamarin. It also allows you to test your app’s functionality which is only allowed on the cloud with timely monitoring of your app.

It’s an open-source framework, which helps developers to develop native apps with Angular, Vue.js, TypeScript, or JavaScript while sharing the app code across platforms.

jQuery is a touch-optimized mobile app development framework. It's an HTML5 based user interface system, creating responsive apps which can be accessible on mobile devices or tablets.

It’s compatible with other mobile app development frameworks like PhoneGap and Worklight. Therefore, developers can develop custom theme based applications for Android, iOS, Blackberry, WebOS, and Symbian operating systems. It’s easy to learn and is quite similar to jQuery syntax.

With the help of Lua, a lightweight, easy-to-learn multi-paradigm programming language, you can develop your dream app which focuses on speed, portability and extensibility. It allows developers to build a project 10 times faster than other mobile app development platforms and enables them to deploy on various devices including phones, tablets, and TVs.

Even if you update the code, you can see the changes in your app and publish them across major platforms.

Adobe PhoneGap framework is an open-source Android app framework introduced by Apache Cordova. It uses standards-based web technologies such as HTML, CSS, JavaScript, which gives the best performance, enabling mobile app developers to build apps that, too, without facing any hardware restrictions. It allows developers to build an app within a few minutes.

Sencha Touch is one of the best and most advanced Android frameworks to develop Android applications. It constructs JavaScript and Java systems that enable developers to configure, create, and test Android apps. It supports HTML5, CSS3, and JavaScript.